Gold Price (XAU/USD) struggles to extend the daily gains around $1,825 as risk-aversion weighs on the metal during Friday’s Asian session. The metal pared the biggest daily loss in one-week earlier in the day before reversing from $1,825.37.

Escalating fears of global economic slowdowns and higher inflation drown the market’s sentiment and underpin the US dollar recovery, which in turn weighs on the gold prices.

That said, the US Dollar Index (DXY) seesaws around 104.40, after snapping the three-day downtrend the previous day.

The sour sentiment recently took clues from Fed Chair Jerome Powell’s testimony before the House Financial Services Committee on Monetary Policy. During the second round of justifying the biggest rate hike since 1994, the Fed Boss cited inflation and recession woes as the challenges to ensure a smooth landing, despite expecting firmer growth this year, during his second round of testimony. The central banker’s concern for recession joined downbeat US data to favor the risk-off mood.

It’s worth noting that downbeat US PMIs also added to the risk-aversion and fuelled the US dollar’s safe-haven demand. S&P Global Services PMI for the US slumped to 51.6 in June from 53.4 prior, not to forget missing the 53.5 forecasts. Further, the Manufacturing PMI not only missed the market expectation of 56 by a wide margin in June, to 52.4 versus 57.00 prior, but also slumped to a nearly two-year low.

Given the light calendar, XAU/USD traders may evaluate qualitative catalysts to keep the bears hopeful.

Gold pares recent losses around the weekly low, the second one in the line, amid steady RSI. However, the metal’s clear pullback from the confluence of the 21-DMA and 200-DMA, near $1,843-45 at the latest, keeps sellers hopeful.

Also favoring the XAU/USD bears is the fortnight-old resistance line, around $1,834 by the press time.

On the downside, an upward sloping support line from May, near $1,811-12 lures the gold sellers before directing them to the yearly low near $1,786.

It’s worth noting that the upside break of the $1,845 DMA hurdle needs validation from a downward sloping resistance line from March, near $1,853. 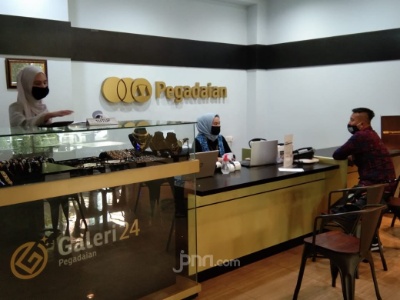